Coach Crow has trained many recent and former Dallas Cowboys, and Pro and Semi-Pro Expansion Teams. He has worked with National Football League (NFL) Hall of Famer and personal friend Randy White, former Dallas Cowboys OL Phil Costa and many other professional athletes.

While Raymond Crow was teaching the Dallas Cowboys in the 1980's, he trained players Randy White, Harvey Martin, Ed "Too Tall" Jones, John Dutton and others. Raymond has also trained players from the Hawaiian pro football league and the LA Marauders, a semi pro league team.

Coach Crow was inducted into the U.S.A. Martial Arts Hall of Fame in 2006, in 2010 as the Jeet Kune Do Master Instructor of the year and again in 2016 for Crow's Martial Sports Science program.

Coach Crow opened the first Wing Chun/JKD and Kali School in Dallas. He as been teaching Wing Chun in the DFW area since the late 1970's. 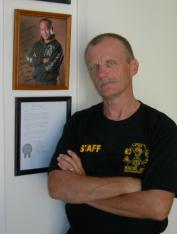